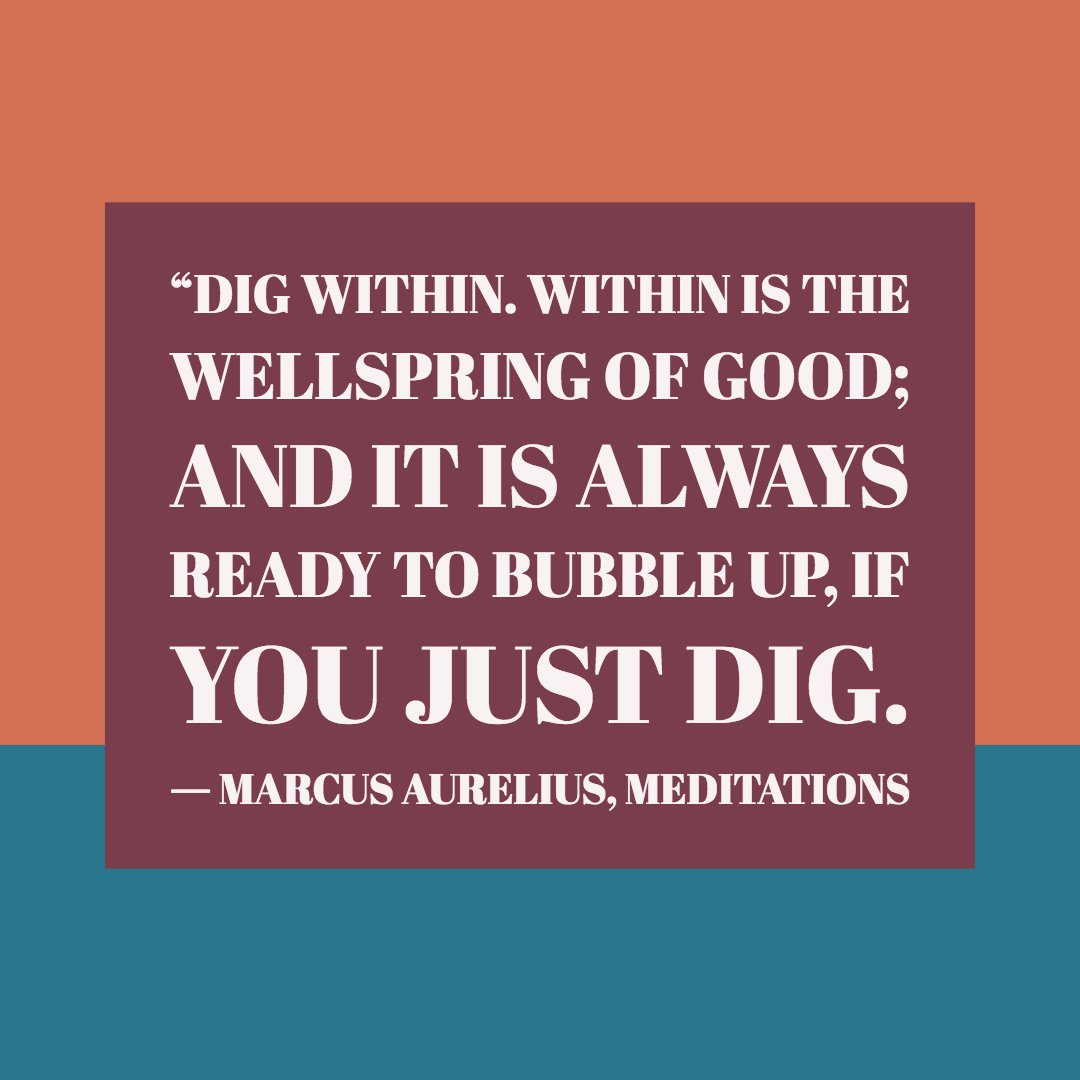 “Dig within. Within is the wellspring of Good; and it is always ready to bubble up, if you just dig.

The culture that we grow up in can have a huge impact on us as to how we view the world. If we’re lucky, we have parents, teachers, and friends that teach us how to listen to our own voice and know what we feel, and what is right for us. Many of us don’t get taught these lessons of self-reliance and self-confidence. We’re taught to please our parents, please our teacher, please our church leaders. Paying attention to what we feel and what we know is right for us is highly discouraged, or at the least given little attention. We grow up relying on the opinions of others to know what we should be doing. We look to see what kinds of relationships we should have. If and when we should get married. What kinds of jobs we should take. What kinds of shows to watch on Netflix.

The thing is, society doesn’t want you to stop and think for yourself. People who take the time to truly know themselves, are no longer easy to control. They are not easily manipulated. They are often poor consumers because they know what they want and don’t waste time or money on things they don’t.

In my case, the church taught me what I was supposed to want. So much of my life was wrapped up in pleasing the leaders and the members of my church. So much so, that I often didn’t know what I really wanted, or how I really felt about things. Even as a grown man, I often find it difficult to know what I really think or feel in a given situation.

When I’m working through what I want in my life, I will find myself looking for the right answer outside of myself because I don’t think that my own opinion is worth anything. I don’t trust that I’m smart enough to figure it out on my own, or that I have the right to decide what I want. To think for myself and do what is right for me, rather than what I think others think is the right thing.

It’s also hard because when you decide what you really want to go after, it’s really scary to think that you might not get it. Often you choose someone else’s dream because if you fail, then it’s not that big of a deal.

“When you confine yourself to only those things that are under your control, you cannot be defeated. Don’t be fooled by outward appearances. People with more prestige, power, or some other distinction are not necessarily happier because of what they have. There is no reason to be envious or jealous of anyone. If you lead a rational life, the good lies within you. Our concern should be our freedom, not titles and prestigious positions. The way to freedom is not to be too concerned about things we don’t control.”

What does Epictetus mean by we can’t be defeated? If we only measure success by the things that we can control, we can never lose. We should never measure success based off of something that we can’t control, in this case gaining a powerful position. He also warns us not to be fooled by what others have because they may not be happier. This means that we should not define our happiness based on what others think is successful.

For example, if I measure the success of my podcast based on how many people are listening, then I will always lose. But if my measure of success is that I put out an episode each week that is important to me, then I am successful. If I feel like I’m improving, that I’m growing personally, then I’m successful.

Epictetus reminds us that if we do our best to be rational, to act on the things that we have control over and let go of the rest then we will find the good inside of us because we will see no need for jealousy or envy because we pursue what we deem as good and important. When we care less about the opinions of others, then we are free from all stress and striving and competition. We don’t care what others think so we do things that are good for us, not what others think we should do, and this is where true freedom lies.

Learning to listen to and trust yourself, and to think critically is a very important part of living a good life. It means that we learn to let go of what everyone else thinks is good for us, and we act on the things that we have control over, and trust that if we do our best, to be honest with ourselves we’ll make good choices. We may make mistakes from time to time, and we’ll fail, but we’ll learn and we’ll grow, and we’ll be free because we are living the life of our choosing, not someone else’s.

How many great things have never happened because of fear? How many times did you give up on a dream because of fear? This weeks episode, we’re going to talk about fear, what it is, what it does, and how to move past it.

This last week, I had the good fortune to be in the studio at the filming of Creative Live’s podcast week. It was one of the most inspiring and amazing growth experiences I’ve been at in years. The energy that present and the generosity of time and knowledge from so many creatives has truly rekindled my own creative juices.

But even as I think about all the creative projects that I’d like to complete in the next few months, I kept feeling this fear rise up in my chest. It was a literal feeling that I could feel. A kind of crushing anxiety.

“There are more things likely to frighten us than there are to crush us; we suffer more often in imagination than in reality.”

— Seneca (Letters from a Stoic – Letter XIII: On Groundless Fears)

My life has been full of a lot of fear. For the most part, I grew up in Salt Lake where your whole life is judged about how well you hold the Mormon church’s standards. I grew up with an abusive father who himself was plagued by his own fears about his own sexuality. I grew up steeped in fear.

I wanted to be a musician and an actor, but I didn’t follow through because was so afraid I would fail. I would ask myself, “What if I never make it into a single movie or write a single song?”, “What if I am a poor actor or musician my whole life?” It was just too much for me to consider so I got a degree in business and became a programmer. In my spare time, I would skirt around the edges of my art, talking about the things I wanted to do. I would buy music gear that would get used for a short time, then sit unused on the shelf for months or years. When I did pick things up and work on them, I could never even finish a song because I was so afraid that nothing I wrote would be very good. I have dozens of half-written songs that I was too afraid to finish.

One of the days at Creative Live included an interview with between Chase Jarvis and Lewis Howes. If you’re not familiar with either of them, Chase is a photographer at the top of his game and the founder of Creative Live, and Lewis Howes has a very successful podcast called The School of Greatness. So much of the interview was truly inspiring, but there was a moment where Lewis said, “the three biggest fears in life are: The fear of success, the fear of failure, and the fear of judgment.” When they talked about this, I felt that same nervous anxious feeling because I could recognize exactly what each of those felt like.

“Remember, however, before all else, to strip things of all that disturbs and confuses, and to see what each is at bottom; you will then comprehend that they contain nothing fearful except the actual fear.”

— Seneca (Letters from a Stoic – Letter XXIV: On Despising Death)

When I get to the bottom on what scared me, I really found that there was nothing there. If I was successful, I had a good head on my shoulders and trusted that I could make good decisions. If I never became a successful actor, I would survive, even if it meant that I lived a more frugal life. But I think it was the judgments of others that was scared me the most. What would they think if I failed? What if they didn’t like my music or my acting? And it’s taken me decades to realize that what others think about my art doesn’t matter.

“Many of the anxieties that harass you are superfluous: being but creatures of your own fancy, you can rid yourself of them and expand into an ampler region, letting your thought sweep over the entire universe, contemplating the illimitable tracts of eternity, marking the swiftness of change in each created thing, and contrasting the brief span between birth and dissolution with the endless aeons that precede the one and the infinity that follows the other.”

What Marcus is telling us here is the anxieties and fears that try to crush us are not only not necessary, but they are simply creations of our own minds. And when we get rid of those, we can free up the resources of our minds to think about the most amazing things, and create the most awesome vision of the universe and our own lives!

I think this fear failure is what’s at the root of so much of our suffering, so I think that it’s a really big part of why we’re often unhappy. So how do we deal with this fear of failure?

First, you need to let go of the outcome and focus on the process. When we are so worried about something not turning out how we want it to, we start to question why we’re doing what we’re doing. We start second-guessing the choices we make. We may even decide to give up on the whole venture because we can’t control how it will turn out. If we can let go of trying to create a specific outcome, and be okay with whatever the outcome is (there’s that whole stoic thing about controlling what you can and letting go of the rest), then we can start to let go of the worrying, and put that energy towards creating.

Second, when you start to feel that fear, you acknowledge it. You recognize that it’s just your brain trying to protect you and the more that you run from it, the scarier it seems. For me, I found if I say it out loud, usually to someone I trust, it’s like shining a flashlight on a shadow. It loses its power.

Third, you can play the worst case scenario game. What happens if I write a song no one likes? What’s the worst that can happen? No one listens to my song. Does it physically hurt me or am I going to die from it? No.

The next time you hit that anxiety and the fear starts to creep up in your chest, don’t run from it, make peace with it. I’ve heard from creative people all the time, that feeling of fear usually means you’re heading in the right direction.